I have a new Lo-Fi Room update! The headline is: I’ve added a random beat mode! This generates random room layouts and beats for you to play. It’s still kind of rough, so some of the beats may sound a bit wonky and there may not be that much variety. Please let me know what you think of it so far :)

Here’s a short video of it in action:

I was inspired by this video, where this guy procedurally generates prog metal music:

I thought I’d try to apply a similar idea to Lo-fi hip-hop, hopefully giving unlimited beats for people to play. I created a few generators that create randomized note patterns based on how I usually write music. There is a drum, a bass, a chord, an arpeggio and a melody generator. They each have randomized samples (i.e. there are a few random sounds that the generators can play).

In the future, I’m planning to expand it a little with some more instruments and improve some of the generation, especially the melodies. Also I was going to change the instrument sprites based on which sample set was chosen.

I also thought that I had finally fixed the audio crackling and slowing problems in the downloadable windows version, however after testing it more I think it adds too much input lag. So if I want to fix this I’m going to have to come up with a solution using an external audio system (which I don’t think will be easy). The Unity audio system is either too unreliable or has too much lag depending on the settings (on Windows anyway, the other platforms seem fine). For now I’ve just built the game with the previous settings and I’ll look into the options for external low latency audio playback. :| Kind of annoying to be honest.

Other than that's I've made minor tweaks to the UI and some bug fixes in the demo, including a volume slider (finally) . 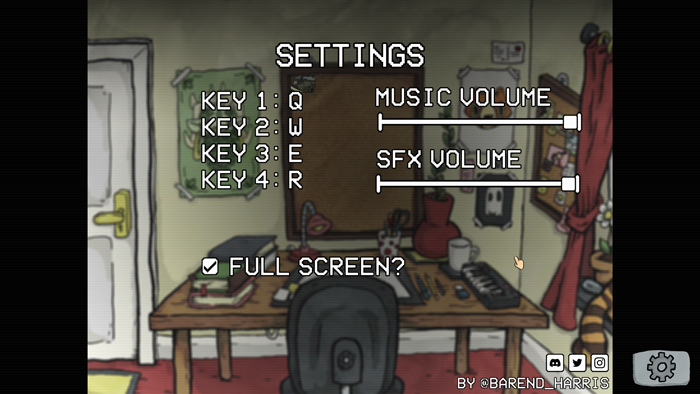 To give you an idea of where I’m at with development as a whole, I have 18 levels done (apart from some animation frames/clickable objects), and art and music for more, but there are still a lot of UI/ implementation details I’d like to fix in the game.

I’ve realized a couple of things with how I’m working. The main thing is that to fix the project structure and some bugs/details I would need to focus on just that for a big chunk of time to make any meaningful progress. It’s too difficult to do that kind of work a little bit here and there. However, I can't really dedicate big chunks of uninterrupted time to developing the game at the moment, I’m also not sure how much fixing and improving those things would add to the game as a whole.

So with that in mind, my priorities are:

The thought process behind this is that I can work on level art and music relatively steadily little by little, so I’ll try to keep that up. The level “modding” is quite a big new thing I’ve wanted to add for a long time so I think it’s worth trying to figure out. In theory it shouldn't be that difficult to create a basic version of this.

Fixing other details is kind of time consuming because of how the project is set up, so I’ll leave those on the back burner for now. I might make some tweaks to the random generation but probably nothing too major. This audio playback thing is probably the most critical problem with the game, performance wise, so I should try to put some time into it that  at some point too.

Anyway thanks again for following the development, I really appreciate that people are playing the game! Also thanks to everyone who makes and shares their beats, it’s always really cool to see people being creative with the game. And of course thanks for the people who have helped with playtesting so far!